*Please forgive the blurry pictures below. I took them using my phone and due to the scary crowds, I was often forced to hop around the edges or climb to some higher spot to take pictures. The result: blurry pictures that suffered from too much zoom-in action.*

Okie, the Singapore International Racing Festival (SIRF) is an annual festival, organised by Singapore Turf Club (STC), that culminates in two prestigious races – SIA Cup & KrisFlyer International Sprint. But before the big day on 20th May,  there is a month-long flurry of activities that aim to bring all the excitement of horse racing to the public. So you will get to enjoy the sight of beautiful Turf Belles (girls who were chosen for their beauty, wit and keen interest in horse racing), equine exhibition and even a horseshoe pitching competition!

Ok, this is essentially STC’s search for its ambassador of the year. An island-wide search saw an overwhelming response from young ladies but they were eventually narrowed down to 11 beautiful young ladies.

These Turf Belles, who would appear at all SIRF events, were dressed in a designer impression of the jockey skills that belonged to the past 11 SIA Cup winners.

I couldn’t get near enough to get a good shot of them but here is a nice poster featuring all 11 of them:

One of them used to be Miss Popularity and Miss Vivacious for The New Paper New Face in 2009…can you guess which one? XD

Here is another picture that I captured with my phone at the NEX Event Plaza on 13th May. That was the day they had their last chance to impress the judges and public voters with their beauty, poise, intelligence and public engagement via a fashion catwalk and Q&A segment! 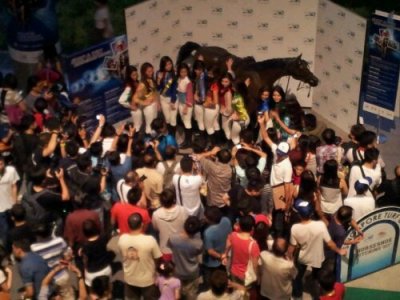 Turf Belles at Nex…no, that isn’t a real horse. =x

The top winner for Turf Belle 2012 eventually turned out to be Avena Seow, a Christy Chung lookalike. She doesn’t look like it but she really has quite a passion for comedy. Avena even told me that she hopes to be on Noose one day. =D

Well, Avena…if you ever read this post…I wish you all the best. 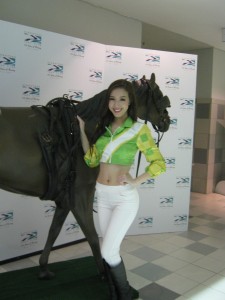 Avena was also Miss Popularity and Miss Vivacious in The New Paper New Face in 2009! Not a big surprise since she has a pretty bubbly personality…she’s also quite the family girl. =D

The roadshows had an equine exhibition that introduces you to the world of jockeys and their racehorses. There was also a horseshoe painting contest that not only allows you to be creative, but do your part for your charity too! The registration fee of $5 would go to Club Rainbow. =D 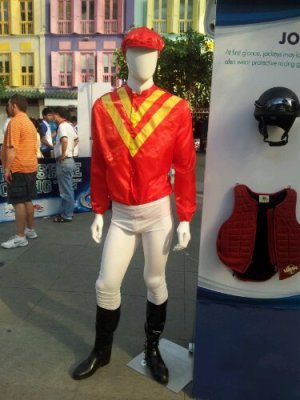 Jockeys tend to wear colours that have been “registered” by the owner or trainer who employed them AND they have to be brightly coloured so spectators can differentiate them during the race. =D 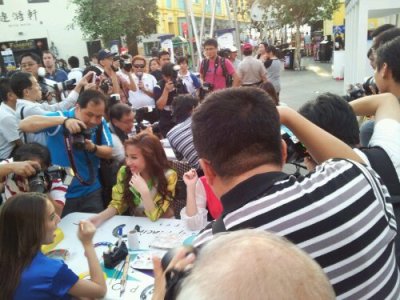 As you can see…the Turf Belles are popular everywhere they go. Here they are painting their horseshoes. XD 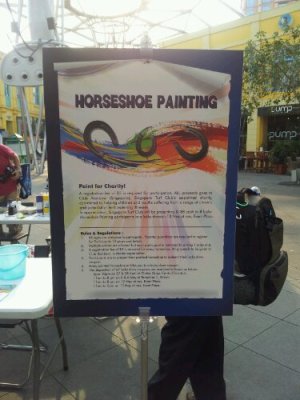 You paint, you donate and you could even win cash moolah!

The painted horseshoes so far

STC also invited a couple of celebrities to their roadshows. Rebecca Lim graced the one at Tampines 1 on 6th May while Lin Pei Fen hosted the Turf Belle segment at NEX on 13th May.

Now this is my most favourite part of the SIRF: Horseshoe Pitching! I even went to try a couple of rounds, but unfortunately I didn’t qualify. =x

Yes, yes. I know my aim is atrocious. T.T

Then again, this game requires a LOT of practice. I met the soon-to-be-champion, Mr Tommy Ho, who told me he created this mock-up of a stake at home and practised using his memento horseshoe he had gotten from a previous competition. I tell you…he is really damn good. Even the emcee constantly put him up as a good example of a horseshoe pitcher. 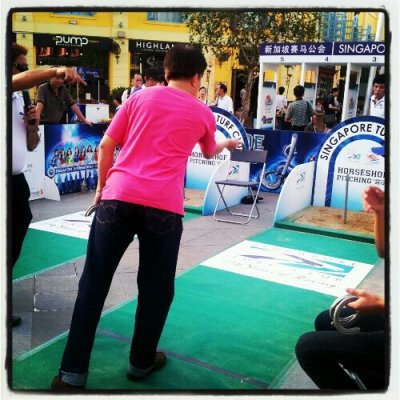 This is how you stand in order to pitch a ringer – which is a horseshoe encircling the stake stuck in a sandpit a short distance away. You can still score even if your horseshoe lands within 6 inches of the stake.

Basically anyone who is over the age of 18, regardless of gender, nationality and religion, can participate. You don’t even need to buy anything. Very cool, right? That’s why you see really damn long queues at the first two roadshows where the finalists were being qualified.

They should make this sport a CCA in schools or something. Quite fun to watch and play too!

Now, I’m no horse punter but I’ve gotta admit that the atmosphere at the STC is quite something. Every time the horses are released from the barriers, the crowd went ballistic. Screams, shouts and fists pumping in excitement filled the air around me. The races were over in a couple of minutes but damn…the atmosphere was so infectious that it encouraged me to make a couple of bets too. LOL.

Unfortunately during the SIA Cup, one of the horses I bet on REFUSED to enter its gate and even threw its rider down a couple of times. =x

Wah…I bet the trainer/jockey must be quite sad to miss the chance to enter this international race. Even horses were flown down to participate lei. Such a good life. =x

Parade ring for the competing horses at STC

Prize giving ceremony for the SIA Cup. Our President was there to grace the event too!

You guys should probably go visit the STC at least once to see what it’s like. I know…it doesn’t exactly look like a glamorous place to be due to all the uncles and aunties but STC do organise events where you can dress up prettily like the recent Queen Elizabeth II Cup. They had this Marquee Party where people could party and watch the races at the same time. =D

AND! If you want something different for your wedding banquet hoh…you can also consider having it at the STC. XD

No one will be bored since they will be horse betting. Hehe…just don’t bet your angbao money away, ok? =x