Wow! I can’t believe it’s been almost four months since my last post. =x Well, good thing I have a couple of events to share with you. Hehe…and I shall divide them into TWO posts. Muahahaha!

First up: the Real Escape Game that has been taking Singapore by storm! I first knew of this game from Sarahcoldheart of the Seriously Sarah fame. She and our fellow Tweet pals had participated in “Escape from the Mysterious Cathedral“, which took place at CHIJMS in January. As one who is kinda into casual games of puzzle, I was intrigued so I decided to pull my bf along to the next instalment to see what it was like. 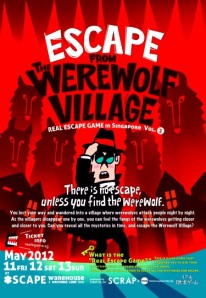 The concept was simple:

You lost your way and wandered into a village where werewolves attack people night by night. As the villagers disappear one by one, you can feel the fangs of the werewolves getting closer and closer to you.

Can you reveal all the mysteries in time, and escape the Werewolf Village?

Sounds exciting, right? Well, I was pretty excited about the game. I knew that it wasn’t going to be easy, but that didn’t mar my anticipation. =D

On the day of the game itself, I met Hanyang – the friendly representative from Gatecrash I had worked with during my CXC event – and he told me that the event was so popular that the session I was going to attend was sold out!

Anyway, he was concerned that I had arrived with just my bf since a typical group is made up of 6 people. But I assured him that my Twitter pals would soon arrive and we would definitely make up a full group or two. XD

Okay, to be frank…I was completely clueless throughout the game. We were marooned in the *Scape warehouse and no one could leave the area until 1 hour later. I tried my best to solve the complicated puzzles, but I think my bf was better at this kind of thing than I am. =x

Along with the other male member of our group, they solved half the given puzzles while I fumbled around uselessly and trying to help. =x

I think the answers to the puzzles would have eventually occurred to me, but sad to say…the countdown and intense atmosphere in the warehouse shut my brain down. =x

I think in the event of a zombie attack…which somehow needs a puzzle to be solved in order to end the apocalypse, I will not be the brains. Let me hold the gun instead. =x