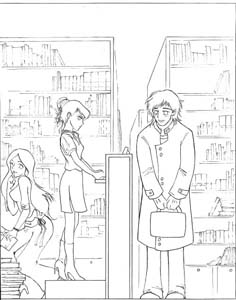 Gail Wu, or Abigail Esther Theresa Wu if you want the full name, at five feet one was not a very imposing figure. It didn’t bother her much since the raised platform behind the counter in her little bookshop ensured that she was on eye-level even with her tallest customer.

Today was business as usual as Gail sat behind the counter, diligently tapping her newest stock into the computer. Business had been moderately prosperous and Gail would have been in a good mood if not for the incessant grumbling behind her.

“Will you stop grumbling already?” Gail shot over her shoulder irritably.

“I want to be out there shopping!” Kitty Baker, a flaxen-haired voluptuous beauty who also happened to be her best friend, whined.

“And blow what’s left of your savings on Gucci? Get real, Kit.”

“I told you not to call me that in public!” Kitty hissed almost automatically.

“I’ve been calling you that for almost two decades now, Kit.” Gail pointed out, “And I’m going to continue calling you that until the day I die.” She gave a mischievous smile that showed off her dimples to great effect, “so there, Kit.”

The bell at the front door pinged before Kitty could pull off an outraged reply and Gail turned with a ‘hail fellow, well met’ smile she had perfected over the years she had her bookshop. Only to come face to face with a tall man with dark hair curling around the collar of his overcoat and limpid chocolate eyes. He had high cheekbones and lips made for a great deal of smiling. In other words, he was drop-dead gorgeous. Words almost failed Gail but she managed to muster enough wits to greet amicably and ask him what he wanted.

“I’m looking for a particular book that’s no longer in print.” He told Gail in a voice with a sexy British drawl that very nearly jellied her knees and named the book in question.

By this time, Kitty and her legendary nose for sniffing out gorgeous males were peeking over the counter. Inevitably.

“I think I might have that book.” Gail frowned slightly as she racked her brains, “Why don’t you wait a moment while I check it out on the computer?”

“And, I’ll keep you occupied, Mr.?” Kitty popped up beside her and assumed a melting smile. It must have been very effective because the man grinned in response, “Grant. Brian Grant.”

“A pleasure to meet you,” Kitty extended a well-manicured hand, “may I call you Brian?”

“Then you may call me Kitty.”

Gail suppressed a sigh of exasperation while she tapped the computer keys. If Brian’s response was any indication, Kitty would have the man under her thumb in one minute flat. The computer beeped and gave the title she wanted.

“I have it.” Gail cut cheerfully into Kitty’s animated chattering. “Mr. Grant, if you’d follow me.”

Brian’s eyes widened as Gail stepped off the platform. “You’re shorter than I thought.”

Gail graced him with a resigned smile, “All the better to wear heels, Mr. Grant.”

“Pleasure.” Brian dazzled her with another of his knee-weakening smiles.

Gail decided she better find that book that Brian wanted before she swooned from charm overload. Suspicious sounds however soon stopped Gail in her tracks and to her aggravation, it was a pair of young lovers engaging in an activity best reserved for quiet parks.

Gail marched indignantly to the young lovers and was so eloquent in her remonstrance that they blushed apologetically and left very quickly. Gail glared at a very-obviously-trying-to-hold-his-laughter-in Brian with a dangerous glint in her eyes.

“Nothing.” Brian replied none too innocently, his lips threatening to break out in a smile, “You get them often?”

“All the time without fail.” Gail admitted in mock agony as she spotted the book that Brian wanted and handed it to him. Their fingertips touched for barely a second but it sent an electrifying jolt up Gail’s arm and made her gasp. Embarrassingly.

“Are you alright?” Brian asked in concern as Gail paled and backed away.

“Wha…what? Oh sure. Erm…I’ll be at the counter if you need me.” Gail babbled frantically before she fled, much to the mystification of Brian.

Kitty predictably, pounced on Gail the moment she returned to the counter, demanding to know that the ‘cutie-pie of the day’ was like. Gail hardly got a few words out before Brian reappeared to make his purchase. To Gail’s chagrin, Kitty blurted out before she could stop her.

“Do you have a girlfriend, Brian?”

A startled silence reigned while Gail stared at Kitty in absolute horror and Brian looked amused. Gail clamped her hands over Kitty’s lips before she could do more damage.

“Sorry, Brian.” Gail smiled apologetically as Kitty struggled to get her lips free, “She was just joking.”

“It’s alright.” Brian assured Gail, “I have a good sense of humour. Thanks for your help.” He waved the book he had bought and left, much to the relief of Gail. She released Kitty and sat down on her trusty stool, glad that she didn’t have to deal with cuties on a regular basis. Kitty glared at her, unaware of her smudged lipstick.

“And what’s wrong with a little honesty?”

“When it scares all single, straight men away from our lives? It’s a crime.” Gail said meaningfully.

“Well, at least I’m honest about being desperate.” Kitty sniffed disdainfully, “Unlike someone.”

Gail chose not to answer that.

It was almost the end of another year and Kitty was getting all excited about her year-end party.

“You have got to come for my count-down party.” She gushed to Gail, “I invited lots of gorgeous guys so you’d have more than enough to pick from!”

“You make them sound like a herd of cattle.” Gail commented wryly, “Why not parade them before us ladies while you’re at it?”

“Nah. That’d be too crude.” Kitty waved the suggestion away, “I prefer the mix and match approach.”

The night of the count-down party arrived in due time and Gail had to remind herself to breathe every time she moved through the crowd of people who had responded to Kitty’s invitation. Kitty wasn’t joking when she mentioned lots of gorgeous guys for they were everywhere. Gail decided a breath of fresh air might be in order.

Stepping out onto the balcony proved to be a good decision as Gail’s dazzled brain cleared in the cool night air. For a while, she enjoyed the scenery that opened up to a riverfront and the comfort of her own company. The balcony door opened behind Gail and she turned to see Brian with an odd little smile on his face. Gail had not seen Brian since that day in her bookshop but it seemed that time had not lessened his appeal to her. Not in the very least.

“Long time indeed.” Gail agreed, wishing the butterflies in her stomach would just settle down. “What’re you doing here?”

“That woman invited you?” Gail cut in disbelievingly, “I didn’t know you two were acquainted.

A quick calculation told Gail that the time frame between that day in her bookshop and tonight’s party shouldn’t be more than three months. A suspicion began to dawn on Gail.

Something clicked in Gail’s mind and she stared at Brian incredulously, “Theodore Grant?”

“Theodore Brian Grant actually.” Brian corrected wryly. “I became Brian after I decided I’ve enough of being called Dora all the time.”

Gail remembered that bookish looking boy with extremely thick and ugly glasses whom Kitty sometimes spoke with and simply couldn’t reconcile that image to the debonair man before her.

“Well, what can I say? You look great.” She said finally, “But why didn’t you tell me that day in my bookshop?”

“I was shy.” Brian smiled, “Besides, I wanted to see if you’d recognise me.”

“Shy? You?” Gail laughed, “How can anyone as gorgeous as you be shy?”

Brian took her hands and gazed deeply into her eyes, “I know this is all too sudden for you but will you give me a chance to show you what we could have together, hmm?

“Saying yes might be a good start.” Brian told her mischievously.

“How did you become friends with Kitty?” Gail asked suddenly, desperate to direct Brian’s attention somewhere else. It was all so sudden that she couldn’t think.

Brian’s amused eyes told her he knew what she was doing but didn’t press the matter. Instead he released her hands and leaned casually against the railing.

“We took a few classes together at high school.” Brian told her, “But we didn’t really get to know each other until our history teacher paired us up for a project. Although others teased her about being partnered with a nerd, Kitty didn’t try to wriggle out of our partnership. At least not, once she found out that I could bring the grade of our project up.”

He shared a mutual grin with Gail. They both knew how hopeless Kitty could be at History.

“And naturally, Kitty soon learnt of my crush on you and tried ways and means to get you to notice me.” Brian chuckled at a particularly funny memory, “To no avail of course since you seemed to walk around with your head in the clouds.”

Gail coughed impishly, “Well, I guess I was as much a nerd as you were in those days.” She admitted laughingly, “I was forever planning what books I’d read next.”

“Then she tried to get me to profess my love for you on Prom’s Night but we never expected you to come down with chicken pox that very night!” Brian shook his head smilingly, “I guess we just weren’t meant to be then.”

“But when I ran into you again at your bookshop, my feelings for you seemed to rekindle, so I looked Kitty up and got her to help me.”

“Now I know why Kitty was looking at me as if she knew something I didn’t the whole time.” Gail said dryly, “You told her to keep it a secret until tonight when you’d reveal your true identity, right?”

Brian nodded, his face closed as if he was afraid of being slapped with a rejection.

Gail studied Brian for a nerve-wrecking minute, then gave a what-the-heck shrug.

“Well, I suppose we could go out some time. When are you free?”

Brian released his breath he didn’t know he was holding, “For a moment there, I thought you were going to say ‘take a long walk off the pier.'”

Gail chuckled, “I could arrange for that if you like. I’m sure you’d look like a dream come true.”

“Besides,” Gail continued as the people in Kitty’s apartment started to count down to the New Year and she stepped closer to Brian, “it’d be a shame to reject a perfectly decent and gorgeous man now, wouldn’t it?”

She planted a brief kiss on Brian’s very delectable lips and laughed at his comical look of surprise.

Somewhere in the distance, a great clock struck twelve.

*Credit for picture goes to Szelin*